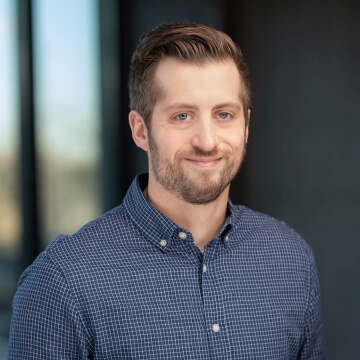 Originally from Toledo, Ohio, Aaron Bronson is a driven yet easygoing leader whose attitude reflects genuine passion for his work. Aaron attributes much of his success to a long-running devotion to the field: by sophomore year of high school, he knew his future would include a career in graphic design. Attracted to the artistic aspects of the work paired with the fast-paced, ever-changing nature of technology, Aaron earned a BFA in Graphic Design from Bowling Green State University, where he was recognized with a James W. Strong Studio Achievement Graphic Design Award in 2014 and an American Advertising Federation Addy Award in 2015. He continued to refine his talents through various freelance design projects that led to a Creative Manager position at another local agency before joining Booyah in 2017.

Aaron began his career at Booyah in graphic design, working up to his current position as the agency’s Creative Director. A curious and perceptive worker, he made a point of learning from each step along the way. “Creativity is about experiences, both good and bad. I’m always observing, learning, and taking in details from life, so I can translate my experience into creative work.” As Creative Director, Aaron oversees Booyah’s Creative Team in developing assetsfor a broad range of clients. Quick, efficient, and adaptable, the Creative Team tackles projects that require flexibility and teamwork to realize a client’s vision. From early correspondence and project proposals to creative direction and developing assets, Aaron’s day-to-day focus is helping his team connect client to customer through design that conveys a clear, compelling message. He finds joy in the generative aspects of working in digital media — starting from nothing more than an idea and creating a face that thousands, often millions, will see. “I like the challenge of working with a very small company to create campaigns that can compete with much larger brands.”