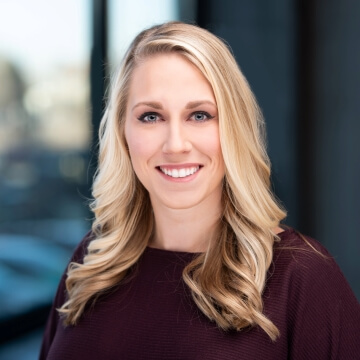 Originally from Coeur d’Alene, Idaho, Aubree Cross earned her BA in Political Science and Spanish from Duke University. She briefly considered a career on Capitol Hill but was instead drawn both to Denver and to the dynamic nature of digital marketing. She joined Booyah in 2013 as an entry-level coordinator, where rapid, hands-on training jump-started her career. Aubree’s attentive personality and appreciation of aesthetics both play into her work: she tends to notice and retain minute details, and her strong intuition enables her to anticipate people’s needs — often before they’ve been verbalized.

Aubree honed her digital skills while occupying various roles at Booyah, specializing in cross-channel integration, attribution, and audience strategy. Having spent many years learning and growing with Booyah — mostly recently as an Account Director leading a team of media experts — she has an intimate and nuanced understanding of what sets the agency apart. After earning her MBA from the University of North Carolina’s Kenan-Flagler Business School, she sought to apply her digital expertise, business training, and Booyah affinity in a broader capacity. Now Booyah’s VP of Marketing, Aubree’s leadership style blends approachability with diligence. Her multifaceted role entails developing and executing Booyah’s marketing strategy, strengthening the Booyah brand, fostering relationships with key industry and community partners, and widely promoting the agency as the thought leader it is.

Known as a champion of organizational culture at the agency, Aubree regularly initiates and oversees the coordination of internal programming designed to cultivate relationships, demonstrating her understanding of the value of balance. “Efficiency alone will not sustain long-term success. The best-performing teams are those in which people work hard together, but also feel seen and understood.” While she’s achievement-oriented and ever-ready to deliver results, one of Aubree’s greatest strengths is understanding that her work revolves around and relies on human connection. She’s a person who looks out for others and values gestures both big and small that make others feel appreciated. Beyond work, Aubree maintains a vibrant interest in all things aesthetic, especially interior design. Along with her husband, she’s also a diehard Liverpool FC supporter, a fervent Cameron Crazie, and a dedicated foodie.